A Light of a Different Nature

A Light of a Different Nature

In its previous incarnation, this blog ended on the funereal note of the death of my wife Carol from early onset dementia.  I worked it into a book,  Dementia, a Love Story, which was a finalist in the non-fiction category of this year’s BookLife competition.

I found that sharing my pain with others faced with losing a loved one to this merciless disease helped me deal with the huge hole left by Carol’s death.  In the same way, I hope this continuation will further the healing process.  In the form of our letters to each other, it will present the bright dawn of the relationship that sustained us through those dark, last days.

I saw her sitting there, as though she had been waiting for me, which was of course ridiculous, and yet was what her wordless glance said.

It was forty years ago.  I had paused for a long minute as I walked past the writing center in the Islip Arts Building on the main campus of Suffolk County Community College on Long Island.  As chair of the humanities division, I had lobbied for the creation of the center to help students with their writing assignments. Leaving the faculty office area, I would pass the converted classroom several times a day.

But this time, perhaps just to see how things were going with the center’s program, I strolled into the room. Behind a table that served as her desk in her role as tutor sat the woman who would become the fixed center of my life.

I introduced myself.  I can’t be certain what other words we exchanged.   In those primitive days, people still smoked, even in classrooms.  One of us might have asked for a butt or a light.  I am making that up.  But what I am sure of is that a light of a different nature had absolutely risen in that classroom.

In retrospect, I think I can surmise what I saw in her that first time.  Her face radiated gentleness, but her abundant, red tinged brown hair projected strong emotions.  And between face and hair, her blue eyes shone with intelligence.

I think now, so many years later, that those three attributes do define her.  Of course, I don’t know what she saw in me before we even spoke, but it was clear that there was something to which she reacted strongly as well.

A connection had been formed.  That connection would obliterate the obstacles provided by our disparate backgrounds, she having grown up on a family fruit farm of several hundred acres in rural northern Michigan, I born and raised in Brooklyn as tenants in a two-family house, she a failed Methodist, I a largely secular Jew.

That connection faced even more formidable difficulties.  She had come to Long Island to accompany her live-in companion of seven years, now pursuing his graduate education up the road from my college at SUNY Stony Brook.  That relationship was approaching its breaking point.

As was my seventeen-year marriage, sustained only by my concern for my two young daughters.

On that day, I don’t think either of us was contemplating leaving our troubled situations.  But neither did we resist the force of the mutual attraction, which would not be denied, and which only strengthened as we got to know each other, until we both recognized that it was stronger than any remaining scruples we might have.

We were both writers, I older and further along in that part of my career, she as a non-traditional student approaching thirty, just getting an academic gloss for her formidable natural talents on her way to becoming an award-winning short story writer.  For her, as well, the physical act of writing was as necessary as breathing.  With a pen in her hand, she wrote what bubbled up from her depths.  She simply had to write, preferably by hand although she was expert on the keyboard.

I have found a huge quantity of these handwritten thoughts on all sorts of surfaces, such as bound journals, legal pads, pages torn from notebooks, and one extraordinary paper napkin, to be described below.

Being compellingly drawn to each other but living apart, we closed the space between us with pen and ink letters.  I was reminded of that correspondence when one day not long after she died, I was searching in the closet in my office, which contains various technological detritus, for a power cord for an ancient reel to reel tape recorder, then on loan to a techie friend.    I didn’t find the cord, but I did stumble across a thick manila envelope containing a stack of letters Carol had written to me over about an eight- or ten-month period stretching from late 1981 into the next year.

Because Carol saved every scrap of paper that contained anything she might need or want to remember, whether a playbill or a reminder of a family obligation, even old planners containing ancient appointments, she would have kept my letters to her.

I found them in one of a half dozen cartons that had been sitting undisturbed on a high shelf in the garage where they were placed on the day in January of 2002 when we moved from New York to Old Mission, a short distance from the house in which her parents at that time were still living.

I now have our correspondence during what was a pivotal period in our lives.  These letters crackle with intensity, frustration, joy, occasional despair but  leavened with humor and determination.  With some necessary editing to retain narrative focus and provide context, I will be offering this correspondence in occasional posts to the blog reading world.

From Musings on a Napkin

Going through Carol’s papers, I have found that she frequently wrote drafts of letters, some of which, apparently, she never sent, as well as what appear to be journal jottings. Whatever their intended purpose, they were on lined paper.  This is the only one I have come across on a napkin.  I imagine she must have felt the need to get some thoughts down when no other paper was available.  The apparent timing would suggest that possibility.  These jottings were written as our relationship had moved into a new stage.  I had established myself in an apartment, and she, having transferred to New York University, had moved to Brooklyn with her companion, but he was often not home and was on his way to being permanently out of the picture.  Our new living arrangements enabled us to call each other more freely and to spend regular time together, so we would no longer need to depend on letters. 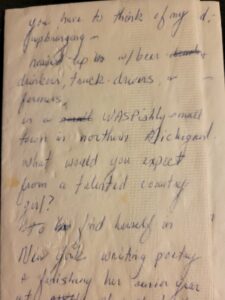 You have to think of my upbringing—raised up with beer drinkers, truck drivers, and farmers in a WASPishly small town in northern Michigan.  What would you expect from a talented country girl? To find herself in New York writing poetry and finishing her senior year at New York University, thinking about law school, having exchanged her mid-western bohemian lovers, as beautiful as they were, for a Jewish professor with two kids and a house in the suburbs….The bohemian laughs in sparkling amazement and goes to dances with a gay friend, still feeling the void of having left the irony and joy of walking away in the parking lot of an apartment complex (where he lives in separation), saddening at  the loss of connection 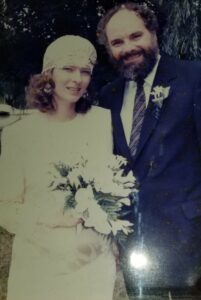 Four years later, when after tedious negotiations my divorce was finalized, and we had been living together in a rented house, we married and bought our own house where we lived until I retired and we moved back to her home turf, that small rural town in northern Michigan.