Coming on midnight after a long and mostly difficult day, as Carol was in a combative mood.  The day was brightened in the afternoon by my walk next door for lunch and conversation hosted by my neighbors Amy and Brad.  Amy is dealing with her own medical issues as she has just finished a course of chemotherapy and will be beginning stem cell therapy to deal with myeloma in her spine.  She remains her energetic and welcoming self, and along with Brad they have set up these Tuesday occasions for me when I have caregiver relief.

It is becoming increasingly difficult to see in Carol the woman she was, that set of qualities and characteristics being slowly driven out by the insistent presence of the Carol she now is.

I can do that by cataloguing things in our house that predate the onset of the disease.

In our dining room we have the bottom piece of a second-hand breakfront we bought years ago.  It had a top section to sit on it, but the only place we could put it was in front of a beautiful old window looking out of the front of the house, so we sold the top piece at a yard sale.  I have no idea what the buyers intended to do with it

The piece we have is about seven feet long and a foot and half deep, providing a large surface, which Carol has filled with all sorts of stuff.  There is the antique typewriter in the middle, whic 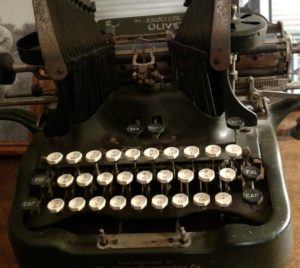 h amuses and interests the grandkids when they come.  Next to the typewriter is a tiny little book of bound pages.  Most are blank, but on a few in barely discernible pencil strokes are short passages, some seemingly personal, others apparently copied from some source, such as the one suitable for a headstone.  I will now never know where this book came from, who might have written on its pages.  Beneath it are two other very old volumes.  One is Elizabeth Browning’s “Sonnets from the Portuguese.”  The second and larger volume is a leather-bound collection of Longfellow’s poetry. It was once owned by a Johnson, but I cannot read the first name.  Perhaps it says “Mary,” which would be Carol’s mother.

It makes perfect sense that Carol would have books occupy a place of honor on this piece of furniture.  She was—I started to write “she is” and had to correct myself—a book person.  She would smile when she told me how her father would find her under a tree reading when she was supposed to be doing some chore on the farm.  One of the saddest consequences of her disease is that she can no longer read, and has little patience being read to, something which she used to thoroughly enjoy.

Much of the rest of the surface holds photographs, mainly of Carol’s family.  Prominent among these is a 8X10 picture of Stella, her paternal grandmother, wearing netting o 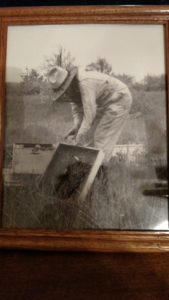 ver her face as she tended her bees, the necessary agents of fertilization for the family’s fruit orchards.  Other pictures include one of Carol and Dean, her older brother as young children,  Tucked into the frame of a photo of Carol when she was perhaps in her thirties or early forties standing before the columned front of a public building, maybe in Washington D.C, one of our travel destination, is the high school picture of one of her best friends.  There is a hodgepodge of others: a shot of me and our daughter in England, a  shot of us with the two couples we used to socialize with regularly, a picture of members of the local historical society in front of the Hessler Log House, moved and restored by the historical society.  Toward the back left corner, not visible behind the photos is a silver tray on top of which is a silver salt and pepper set, somewhat tarnished.  These items I am reasonably sure came from her mother, probably passed down from her southern grandmother.  Right behind and to the left of the tray is my space in which sits a trophy I received as most valuable player on my sandlot football team, and next to it a picture of me receiving it, with my father by my side.  I mention this at this point only because that trophy from more than fifty years ago was buried in a corner of a closet until Carol insisted we take it out, polish it up, and display it.  It thus represents the Carol that was in her feelings for me.

On the walls of our downstairs living space are, with one exception, pictures she has chosen, such as the one of the French fur traders in a canoe I included in my last post. Upstairs in her office, her computer has a number of files in which she was laboring to begin a novel for which that print could serve as a cover. Her focus would be on the Native Americans.  The French would be there as an excuse for the story to begin.  The last story she published a couple of years ago featured a missionary priest, a young Native American woman, and a wolf.

Other pictures include a rendering of the Edmund Fitzgerald going down, and in another frame a startling image of a lighthouse keeper standing atop his building as storming waves rise to his feet, both reminding me of her love of water, and the Great Lakes in particular.  She never did fully share my passion for ocean waves and beaches, preferring the calmer grandeur of the lakes.

Also on this wall, there is a well-executed water color of the buildings of Fishtown in Leland on the Leelanau Peninsula, across West Bay from where our house sits on Old Mission Peninsula.  She saw the picture hanging in the infusion room where she was getting her chemotherapy, and as was her wont, inquired about it, and found out that the artist was local.  Either he, or perhaps his wife, had sat in the same room.  We contacted him and bought a print of the picture.

The only non-Carol picture on these walls is an impressionistic image of a jazz musician that hangs above the piano Carol used to play.  It is a print from a slide given to me years ago by one of my writing students at Empire State College on Long Island, NY.  As I recall, he was an older man, a better artist than writer, but as was usually the case with students at Empire, strongly motivated to succeed.

I pause to look at this catalog from a different angle: those pictures Carol bought to show her connection to my b

ackground and interests. In our little TV room, the one we call the green room for the obvious reason of that color on its walls, there is the famous print of a photograph showing workmen calmly sitting high up on a steel beam, part of the skeleton of the rising Rockefeller Center, sitting there and eating their lunch.  One can only wonder where the photographer was.

I began this survey of the artifacts in our house that expressed Carol’s interests.  Then, I turned to those that she had bought specifically for me.  I will conclude 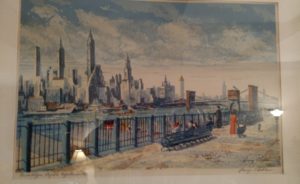 by combining these perspectives where our love for each other found its most appropriate place.  While Carol was finishing her undergraduate degree at New York University, she moved to an apartment in a brownstone in Brooklyn, my hometown (about which more in a forthcoming post).  I would come in to stay with her whenever possible.  We enjoyed spending time on an elevated walkway called the Promenade in Brooklyn Heights, which offered a view of  Manhattan across the East River.  On the wall over the fireplace in the living room is a print she bought representing that place and that view. In my office upstairs is another of Carol’s choices for me:  the official team photo of the World Series winning 1955 Brooklyn Dodgers,

Besides pictures, there are the work spaces.  To write, Carol demanded isolation.  We began by setting her up in the partially finished basement with a desk.  When we decided to turn the basement into a little apartment for the convenience of my New York daughters and grandchildren, she lost that space.  Nothing else was available in the house.  Our daughter still occupied her bedroom, and my office had been, from the beginning, in the remaining bedroom.  So, we contracted with our nephew to deconstruct and reconstruct a small outbuilding that the previous owner had used to house a horse.  He made it into a rather nice office.  I believe it already had electricity, but we had the Internet wire brought out to it, and supplied it with a phone line and a walkie talkie to communicate with me in the house.  We furnished it with two desks, one regular flat surface, and one for the computer.  Because Carol was heavily into her photography interest at that time, we also put a large cabinet, designed to hold photographic prints.  In it now, as well, is the professional grade Canon ink jet printers with which Carol started a business turning her photographs into saleable items.

None of this, however, got much use.  Winters made the building difficult to get to.  And it had no bathroom.  In it however, I recently found a notebook in which she was writing notes to herself in an attempt to get her French fur trader novel into gear.  I have only glanced at it, but in the proper mood when I want to bathe in my memories of the writer Carol was I will sit down and read it.

When our daughter moved out, Carol took her bedroom for her office, and we bought another desk for it, leaving the other office furniture in the little building, which we came to call the barn studio.  She worked well in her new in-the-house office, writing her stories, and organizing them into a collection, which we hoped to sell.

Then came her cancer, and subsequent decline.  Her office now houses medical assistance equipment, such as the shower bench she no longer uses.  Her laptop sits on the desk, next to the phone extension.  It’s a lovely place to work, looking out as it does at the orchards across Center Road.

A lovely place, but I’ll leave it as it is.

It belongs to the Carol that was.