[In these letters, I tell Carol how I am delaying the fatal step of leaving my marital home while she deals with her growing frustration.]

This first mentions a “truce” in my marital home as conditions there had been something like a war zone.

Sitting here in my office among unsorted piles, feeling very mellow and loose–two Black Russians with lunch….Wondering if I’ll see you tomorrow when maybe I  should be wondering what I’ll do in my class in 1/2 an hour.  Past wondering about the second–can always do something–and about the first, wonder isn’t quite the right word, even in my temporary mellowness.  More like needing, wanting, willing you out here.

The true is getting very ragged.  Prediction–it will not survive the weekend, if it makes it ’til then.  Will try not to provoke, but will not bend too much.

My mind is moving very slowly, now, calmly, and I need to get the blood circulating a little.  Take a walk and then teach.

Again at my desk among clutter, just enough room for pad and coffee cup and ashtray, perched precariously atop one of the piles, waiting for a certain phone call, not wanting to be bothered with anything else….

The truce predictably, but no less sadly for the predictability, shattered last night, was patched together, and then fractured (not a complete shattering) again this morning.  Holding it together will require a great deal of energy, even for a limited time, but to that much I am committed, admittedly a holding action that has its destructive components, and potential for rending fracture.  A logical question, of course, it why the commitment–to which there is no logical answer.  But I am still rational enough to know that reason will not, finally, provide answers in this situation.  Bones will, and do  talk clearly and unambiguously, and they tell me right now that they want to squeeze yours, hard, and long.

Carol responded in two ways to what she perceived to be my situation, my staying in an untenable and destructive home environment: an attempt at understanding and then a shedding of her conscious attempt to not appear to be urging me toward a divorce.

First, a short note, which I pick up after the first few lines, accompanying this photo.. 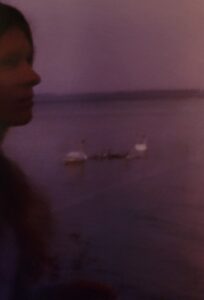 …I discovered this old picture Jane [sister] took in ’79–a modern version of Leda & the swan–and lacking any inlet to expression w/ this here pen, gave up (momentarily) on creativity via pen & paper for a short description of woman & swans.

Here you have the swan w/ his family fleeing into the refuge of the bay from Leda.  Leda looks like her fantasy has just left her for better places–so much for modern Trojan wars.  The swans are a little ways off shore but it may give you an idea of their size–especially the male.  Notice how he’s positioned himself between this threatening human (!) and his family  His wings are slightly raised to fend off any seeming child-nabbers, not an uncommon experience for them.  The little ones have a history of getting eaten alive by weasels, extra-large fish (there’s some out there in that bay) or, if small enough, by snakes.  He’s right, the male, to be wary, but poor Leda has only admired.

A fanciful, sort of tongue-in-cheek version of the classic Leda and the swan story, in which Zeus in the form of a swan (don’t ask) rapes Leda, producing Helen the casus-belli of the Trojan War.  In Carol’s version, as expressed in her note, she is Leda, admiring the children being protected by the male swan, that is by me.  She characterizes herself as the threat, the (!) the male is aware of while declaring she “only admired.”

I read this as her correct recognition that my children were the major impediment to my leaving my marital home.  In another very long letter, which I have edited for length and focus, she confronts my stalled movement out of my marital situation much more directly.  First by comparing it to her own experience, albeit with very different circumstances, no children, no property, but overcoming similar inertia before extricating herself from a disastrous first marriage, and then by declaring without ambiguity what she wants me to do.

I skipped class this evening for the sheer joy of being outside in spring weather.  Antique clothing shops turned up futile this time & I’ve come back to the ap’t, to eat a dinner (quietly by myself–joy in itself) of tuna fish, Ritz crackers & cheese & wine.  It’s so fulfilling to sit here & write to you & eat a simple dinner as if this was all I ever needed (almost) (not quite). (There’s you).

After commenting on my situation as I had described it to her, she moves on to her marriage.

So I’ll tell you the underlying story.  I did what you’re doing–the same way, the same thought  that it’s the best way. [He] of course was insane to begin w/ but never in a bad way (not horribly bad anyway) and your wife seems to have a measure of sanity.   But the pattern’s the same  The end goal may not be–she may reach a form of resolution; but then she may not, also.  The pattern between them is not a particularly similar one, but the pattern between you & me is  too similar for comfort, maybe that’s why I’m writing….

I waited five years to file for divorce…I’m done.  Now you know a part of my story & I’ve tied it all in w/ yours & no doubt unjustly.  You’ll probably come back & tell me it’s not the same, not similar & granted I’m not there watching the proceedings.  But I see you playing the passive partner for your wife’s sake & listen to you now say “if” interchangeably w/ “when” when only a few weeks ago, it was “when.”  And a bottom line: maybe I’m saying all of this because I sincerely feel you’d be better off out of that situation, that marriage…Let me end this w/ a better line: how long will you try to steer the boat upstream when it wants to go down & you want to be on a different river?

And since I’m feeling feisty–this next is from an old letter never sent that we spoke about on the phone Tuesday.  If I ever thought you were even considering staying in the fold & thinking you should forget about me, you’d find me standing outside your office door w/ a wicked brilliant anger the next sunny morning & you’d see a side of my nature you’ve only sense so far–a rage that would shake you out of everything you’d ever known & demand to know what the hell you thought you were doing, giving up me for a simple sense of domestic continuity (hardly simple, but still…)

The windows are o;en on the front of the ap’t. & the rain on the pavement seems timeless, endless.  Parts I don’t understand: people who know nothing of you, nothing of my situation, send pictures of my marriage; a long gone lover calls in the late evening hours; a gentle, pervasive no sends it all away.  For the first time, there is no longing for them, no wondering if all that former warmth & intimacy could revive itself, forget the best parts & relive again.  There is no desire on my part to bring back what should always (& has) remained nostalgia.  There is only this rain–a constant, a sad constant, because no matter how I work my life or what more independence I see for myself in the future, you re inextricably bound up in it, & yet still–there aren’t any answers, except feelings–

Could hardly let that last part fall into your hands w/out a positive emphasis of some kind or another.  Now, lying in bed, I feel the resurgence of progression–sort of like fate, only fate as such a negative connotation.  More like a line drawn–a forward, mobile, progressive line.  Independence, as mentioned above, is only a surface word for one of the parts of the line.  I want two things: I want that line, and I want you.  I have no idea…how to bring the two together  That’s the nature of the sadness….

[The letter went on, but I do not have another page.|