Afternoon. I am back on my perch in the living room while Carol is on hers, sleeping noisily on the couch.  It is a fall day outside, gray and rainy, the leaves on  the abundant and ancient maples on our five acres  beginning to turn and fall

The oak woodwork on the staircase leading to our upstairs communicates solidarity, but does not persuade Carol to go up to the two landings and through the two turns to reach the hallway leading to our bedroom.

In fact, her condition has worsened beyond her inability to climb steps.

She will not stand though her legs are quite strong enough to support her.

Her fear is stronger still.  I can lift her to her feet, but she tries to sit back down, and I wind up supporting all her weight until I can steer her back onto the couch.

Thus, her fear of falling is now crippling, creating in her a paralyzing panic, even sometimes—and this is a crucial point—when she is lying flat on her back.  This fear does not seem to result from  her memory of a fall. I don’t think she now remembers the one she had some ten or twelve years ago, which gave her a broken ankle.  No, it seems this fear arises from the lack of communication between  her eyes and her brain.  I can only try to imagine how disorienting it must be to not know, literally, where my body is, but that is my guess as to what causes her debilitating fear.

Evidence for this hypothesis comes from at least two professional sources.  At a routine eye exam about a year and a half ago, she could not read the chart.  She could see it, but she could not read it. Her brain did not understand, or perhaps receive, the images from the chart brought to it through the agency of her eyes.  The doctor checked her vision as he would a preliterate child by shining a light through her pupils and declared that her vision was good  Further back, when she had recently finished a course of chemo, I was taking her to an occupational therapist at the local hospital to see if she could recover her beautiful handwriting and the ability to read without losing focus.  At that point, her brain was doing a much better, but still inadequate job of deciphering images presented to it.  The therapist noticed that Carol was only comfortable walking down the long, wide corridor leading to the therapist’s room when she was next to the wall.  Apparently, that proximity to something large and solid enabled her to place her body in relationship to the physical space through which she was moving.

Because of our present living arrangements, sleeping on the sofa in the living room, I do not spend much time upstairs.  In the morning, I go up to our bedroom to get fresh clothes and to shower.  I visit my office in the room adjoining our bedroom to get used to the new desktop computer I purchased recently when my old one, with all of our financial records, as well as various writing projects, showed signs of its impending collapse.  I don’t know when I will start working more on it and less on this laptop.

When I do go into our bedroom, I see the new sheets on our bed, which I bought not that long   ago, when there was still hope that Carol would be able to overcome her fear and make it up the stairs. I walk past her dresser   On its crowded top are pictures, including, a shot of the teen-aged me, one of herself and older brother as children, and another of our daughter as a pretty young girl, but also  feathers in a little vase, a small drum, both indicators of her interest in things Native American, and in one corner shoved against the wall, a purse she will never again carry.

In fact, the whole house reeks of Carol’s presence.

I use the word advisedly, not in terms of its olfactory denotation, namely, a disturbingly unpleasant stink, say of rotting organic matter.  No not that sense.  Rather that the word also denotes the pervasive presence of that odor.  It is inescapable, it thrusts itself at you.

Through the objects placed in this house by Carol, she is everywhere.  She stamped her  identity with the art work depicting scenes of the Great Lakes, with the old violin hung on the living room wall, along with its bow, recalling her love of music, with the Kodak Autographic Junior on yet another wall bespeaking her love of photography, for she was above all a highly visual person, and all over on table tops and window sills her idiosyncratic interests, stones and  pieces of wood she picked up on walks, anything that struck a chord in her deeply imaginative mind, triggering memories of her childhood here, her fascination with all things local, lighthouses, evidence of native Americans’ ancient presence, and, perhaps above all, the topography, the bays, the hills and woods, the farms, for all of it she found a way to place it in our living space. (See and click on images below for examples.) 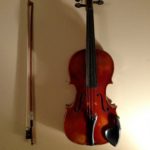 Kodak Camera Don’t Know Where It Came From 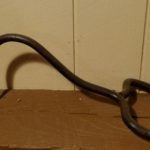 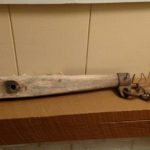 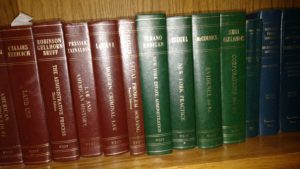 But there are also the more mundane reminders of the once but no more, the two pairs of winter boots in our bedroom that she will never wear, the watch on her dresser bought on a birthday, worn hardly at all for it soon became clear she could not read the dial, the wonderful winter coat I found online for her on a spectacular sale, the books in her bookcase, anchored on the bottom shelf by her law tomes, the rest reflecting her interests in women’s history, women writers, and politics.

All of this is best described as bittersweet.

Sweet because of how these specific items remind me of our shared lives, how dominant she was in shaping our mutual environment.

Bitter because those specifics no longer connect to her mind  in any meaningful way.

And how sad that her fear prevents her from moving through and appreciating the environment she created.