Just back from town for weekly grocery shopping.  At the butcher shop one of the clerks asked after Carol.  We always used to food shop together, and this person hadn’t realized that I had been coming by myself for some time.  When I explained why Carol was not, and would not be, accompanying me, she did what it seems everybody does in that situation: she referenced her grandmother whom she said, she had seen, but had not been seen by, for fifteen years.  Such a response, I suppose, is a way of sharing.  The first few times somebody so shared, it was mildly comforting, saying together we  belong to this group of suffering human beings.

I confess, now, it has become a touch annoying.

I’ve heard that men often try to fix problems.   In relationship advice expositions of this tendency, men are encouraged to just listen to the woman’s account of what is troubling her.  I saw an amusing video to this effect posted online in which the woman is describing this discomfort she feels in her head.  When the camera shifts to the man’s perspective we see that the woman has a nail in her forehead.  The man tries to point out that fact.  She continues talking about the discomfort.  He listens, perplexed.  The title of the video is “It’s Not About the Nail.”

I am not interested in the relationship implications of this gender analysis.  And I have no idea whether it is, in fact, true that males feel compelled to fix things while females desire an empathetic listener.  Dealing with such hypotheses is well beyond my pay grade.  But what I can say without hesitation is that whatever the case might be for my male compatriots, I have that trait.

I want things to work as they are supposed to.   If they don’t, I become irritated.  And try to make them behave.  These attempts at fixing mechanical problems can be problematical, but usually not fatally so. I am persistent enough, intelligent enough, and wary of not doing anything stupid enough, to generally manage to fix things rather than do further damage.  That combination of limited natural talent and decent intelligence indicates why had I continued with my original college plan to become an engineer I would have been a mediocre one, forever swimming upstream.

Did not get much writing on this on my last session. Life intervened,  most significantly by introducing Carol’s stomach upset resulting in vomiting and diarrhea for the better part of an afternoon.

She’s better now,  and I have just made my way, with some difficulty back from our mailbox.  On this rural stretch of road, all the mailboxes are on one side to accommodate the carrier’s route.  Ours happens to be across the road.  That can be a bit of an issue in the winter, but there is no snow yet.  On the other hand, the leaf peepers are out in full force, driving up and down the Peninsula as the leaves, particularly the maples, begin to turn.  We are nowhere near full color, and yet I had to wait several minutes each way of my crossing, and even with the wait, I was obliged  to hustle.  I can see what’s coming from the south for a decent distance.  From the north, however, traffic comes roaring up and over the crest of a hill.  This road is a state highway with a 55 mile an hour speed limit.  A little inattention, as for example if I were to be looking at the envelopes in my hand as I head back to our house, and I would be road kill.

I will try to pick up the thread where I last left it before Carol’s illness.

My most recent fix-it project involved our fairly new dishwasher.  As with so many products, this otherwise sturdy appliance relies on little pieces of plastic in what can be important places.  In this instance, it has decorative plastic clip-on pieces at the end of the track through which the rollers of the top rack slide.  The job of these pieces is to stop the rack from riding off the track.  After a wash cycle one day I found this plastic piece from the left side track on the floor of the tub.

As many times as I popped that piece back on, it would not hold.  I observed how the one on the right was positioned, duplicated it for the one on the left, and maybe it would remain fixed for a couple of washes.  Then, thinking I had finally fixed the problem, I would slide the top rack out to put something at the back of it, only to have the rack continue past its end and dangle without support.

At first, I simply resolved that this matter, particularly in light of the other more pressing complexities of my life, was simply not worth my attention.  And yet, I could not tolerate the fact that this part of the machine was not operating as it should.  I recalled how a repair technician solved a similar problem on a previous machine, and I came up with an answer. 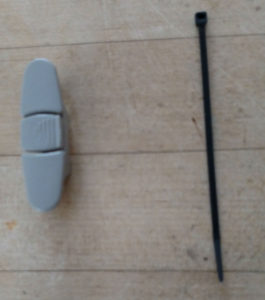 I fashioned a new stop for the track, using a four inch plastic cable tie, finding a way to thread it through openings on the end of the track so that it would now block the wheel where the plastic used to perform that function.

The repair has worked, and I feel a little surge of satisfaction every time I roll that top rack out.  The thing is again working as it should.

I find it difficult to leave problems alone.  I will persist and apply my limited mechanical aptitude until I find a solution, or failing that, eventually cry uncle and call in a professional.

I am facing such an annoyance now with my watch, which has a little window through which a number corresponding to the day of the month appears.  The mechanism that causes whatever this number is inscribed on to turn to the next date has somehow gotten out of whack.  I’m guessing that the mechanism has to be lined up in such a way as to ignore the sweep of the minute hand past noon, and then turn  some kind of wheel to expose the next number when the minute hand goes by twelve midnight.

However, it does not quite do that.  Rather, it either turns too early, so that the new number shows up after noon, or too late, so that the old number remains after midnight until noon the next day.  I have tried to fix this malfunction by using the adjusting stem that manually changes the number when it is pulled half way out so as to be able to work around all those months that have only thirty days.  But no matter when I make the adjustment, such as turning to the new number right after midnight, the problem returns, unchastened and bold.

Clearly, I can’t fix it.  Perhaps a watch expert can, but in spite of my irritation, this is just not worth the effort now.  So, I will live with the fact that as I look at my watch at this moment, it insists that it is the 22nd when I know full well it is the 21st.

Whether or not I am exhibiting a typical, or perhaps an exaggerated, version of the male fix-it mentality, I respond to most problems with an urge to set things right.  In my professional life as a college administrator, this trait was probably useful.  As a writer, and teacher of writing, it underscores my purposeful emphasis on rewriting.  And, as I have indicated, in my personal life, matters large and small induce the same response.

How then do I fix Carol?  How restore the wheels in her head so that they line up properly again, and mesh as they are supposed to?

There is no place to fasten a tie to stop her thoughts from sliding off the track.

I cannot make that repair any more than I can get my watch to function properly again.

To fix my watch I have the option to take it into town to a jeweler.

But there is no expert repair shop that will  restore Carol to her wonderfully working self.

That failure produces in me an emotion laced with anger, frustration, and above all, a constant and deepening sadness.