For this post, I’ve edited down a very long letter from Carol, which begins  by placing herself for some reason in a building at SUNY at Stony Brook (SUSB).  It’s likely that the friends she mentions visiting toward the end of the letter had some connection to that university.

I’m sitting upstairs in the chem bldg @ SUSB watching a very quiet, very frozen campus.  A few people trickle out of the elevator occasionally–they all look very purposeful, carrying briefcases w/a sturdy walk & sturdy looks.  They glance at me, my back against a brick wall, Descartes’ meditations on the floor beside me next to two cigarette stubs, one knee pressed against a cold windowpane, pen poised–a pause as they go by that anyone would be here but me.  I think they look at me & think nothing.  I look at them & wonder what academic forces bring them here to invade my space (how could they?)

The letter moves on to recount a meeting she had with a very good friend, whom I would meet down the road  The meeting occurred at Reese’s, a name that means nothing to me.

My tail bone hurts from sitting on a wooden plank over the radiator @ Reese’s, gnashing my teeth at Marsha.   Two stereotypically  true artistic temperaments hard at work trying to make a damned good, difficult relationship work.  All ended nearing well.  I think NYC must be filtering something into my blood these days–relationships get more difficult & complex & a hell of a lot more rewarding.  They always were to some measure before in my life but this! Between you and Marsha I keep wondering if I was saner before I knew either of you, or if I’m saner now because of both of you.  I feel like I’m testing myself, especially w/ you, but for what purpose?  If it was just a test would it be to see if the rewards could match the difficulty?  I suppose if it was just a test, that would be a good answer, wouldn’t it?  But I think Friday morning gave me the sweetest moments I’ve had in a while & tucked away a lot of indecision.  I can be so self-righteous sometimes, you know–why should I (Supreme Indignant Being) have to put up w/all this nonsense?  As if Indignant Being didn’t know an answer was lying softly side by side that morning.  Next week (week of Feb. 1st) Stony Brook starts again.  Best times for conversation are Tue. eve late–after 9–Wed. til ‘3, Wed. night late–9:30 or 10 or later.

I’m not out job searching yet—you can probably reach me Tues. & Thurs. days ’till I start working.

In case I can’t tell you over the phone this week, I had a rather exciting time after I saw you last.  Went Sun. evening to see a friend (football time) & about 45 minutes later was in the emergency room @ Mather for severe abdominal pain….

She describes the procedures she underwent in some detail, at one point comparing the experience to being in a Woody Allen movie, perhaps Sleeper because of all the technology involved.  Promises that she will tell me about the “chandelier effect” caused by the examination leading to a diagnosis of severe Pelvic Inflammatory Disease for which she received “massive doses of penicillin, prescriptions for antibiotics & codeine

,,,& four hours later I went back to friend’s (fortunately having missed the football game, but they got to watch it in superb color at the hospital.  Anyway, I don’t think it would concern you physically–the dr. said he couldn’t say for sure until my cultures come back on Friday.  They don’t know how long I had it before it erupted–but considering we’d been together Fri. & Thurs. I’m sure I had it then.  So if you develop some kind of symptoms it might be worth checking out.  The nasty side of this is that occasionally, depending upon the kind of bacteria, I can transmit it.  Anyway, although I don’t like this nasty side of it, I thought I should certainly tell you about it just in case–Well, another ailment to add to my increasing list of ailments for a person whose worst sickness used to be an occasional hangover….Well, I’d best be off to dinner–there are advantages to being ill I think, like lying on the sofa listening to music, writing to you, while dinner is being cooked w/out my participation.  Not a too small joy that one.  Talk to you soon.

Don’t know who was cooking the dinner, perhaps Marsha, but the comment reminds me that neither of us particularly enjoyed that job.

I imagine we managed to talk about this incident on the phone.  Fortunately, the infection was not transmitted to me.  It would have been interesting trying to explain its source.  Our next correspondence is pictured below: the card I sent  for her birthday on the 30th: 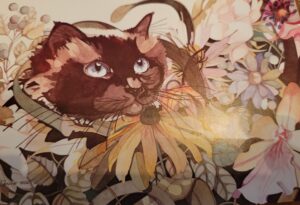 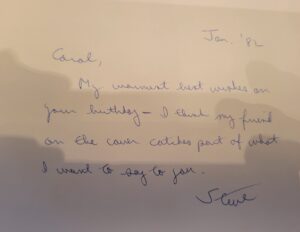 Carol,
My warmest best wishes on your birthday.  I think my friend on the cover catches part of  what I want to say to you.
Steve

Preview: Carol’s typewritten  meditation on cats , accompanied by a brief handwritten note followed by my poetic response to it.