This follow-up to her description of  working with her family on the cherry harvest offers a meditation on woman and machine as well as a paean to her roots.  My guess is the machine in question is a cherry shaker, as she was proud of her status as the first woman shaker driver on the Peninsula.  Monk, in her closing, is a character in a series of my short stories.

I’ve been covered w/ grease & dirt & working in  the HOT orchard sun for two days trying to erase the winter’s wear on this piece of hulking technology that seems to be my responsibility.  I think there’s a story here somewhere on the strange & intimate relationship between woman & machine.  It begins w/ the ultimate emotion of frustration & digs into those stranger feelings brought about by a broken fan belt on a highly sophisticated machine that is entirely irreparable by the intuitive process. I think the story ends with the inevitable: machine continues its life span on into the future (where it belongs) & woman, in 95 degree temp. dies of HEAT. 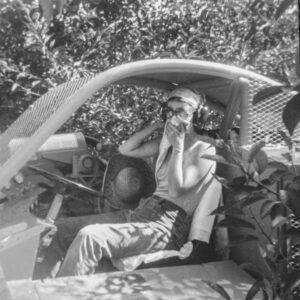 In the cab of the cherry shaker

But Lake Michigan, in its purest form is only 15 steps from my parents’ front door & midnight swims cure most ills.  It’s 2AM now & the house &  inhabitants sleep while the lake & I ponder or perhaps I’m untrue to the lake–it always does–personification uncalled for–& I write.

This one, which is dated August 27th, has Carol writing from Lake George in upstate NY where her house-mate’s family vacations.  It opens with a reference, again, to a letter I don’t have.  In it apparently I mention the publication of a fun opinion piece I wrote on the “Personal Notices” in Newsday, the major Long Island newspaper.  And I must have responded to her critique of the chapter in my novel.  Her humorous comment toward the end of the senility she hopes to attain at  60 is bitterly ironic considering the early onset dementia that shortened her life.  She mentions her desire to write a novel, an ambition she never lost.  She started and worked persistently on one dealing with the French fur traders and natives in the 17th century and another set during the riots in Detroit.

A second reading has deciphered your scrawl–except for one word on the last page which may demand more thought before it offers up its meaning.

Hard labor is not compatible w/writing, is compatible w/sleeping, and is exhausting.  It’s only invigorating for two days and then effort is the key to maintaining an acceptable form of sanity.  Staying w/my family for a month may lead me gently toward the edge too.  I seem to thrive on isolated or semi-isolated households.

I’m at Lake George again–no relatives this time.  Have been to the city & secured an apt. in Carroll Gardens in Brooklyn.  ….I may be on Long Island again for a couple of weeks since the apt. doesn’t open up until Oct. 1.  If so I’ll give you a ring….

I can imagine it must be frustrating to follow the Personals in Newsday.  Are you making a comment on public opinions of Newsday writers?

You are right of course about the importance of sexuality.  It’s very easy for me to wander around the walls of justice when it comes to women and forget about human emotions.  Lois is in perfect character form as a prostitute.  I’m not sure what that has to do w/making love that inspires aspiration, but then it is not my novel, and to change her character  in my mind would be for me to write my own novel of someone like her and the two men.  I find more & more that I want to write a novel, but it’s that fact about myself that still stops me  The narcissistic walls of justice are sometimes too high to see over.  Or in truer terms, my own high-blown ideas don’t often make way for other people’s thoughts or a different way of seeing.

Congratulations on being 39.  I hope you celebrated well.  I’m waiting to turn 60 (a few years or more) so that I can feign senility at which point I will be excused for my earlier irrational disorder….