Speaking the Unspeakable, A Contemporaneous Journal 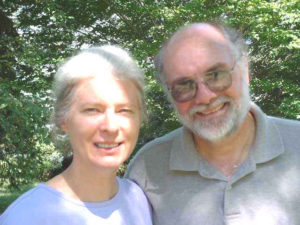 You see the distracted pedestrian step off the curb without looking for oncoming traffic. You witness the startled face of the driver of the car barreling down the road, hands tightening on the steering wheel, eyes looking for a way to avoid the inevitable. There is none, the brakes squeal, horn blares, and then there is a thud.
This is an illustration of my life at this time.
Every day, I observe this accident scene unfold in excruciatingly slow motion. My wife Carol is the pedestrian. The driver of the vehicle bearing down on her is her disease.
She has dementia.
That is a scary, if not evil sounding word. Its root comes from the Latin combination of de, out of or away, and men¸ to think. Putting them together you get “out of the mind,” and by extension “raving” or “mad” in a typical dictionary entry.
But those are inaccurate, at least in my wife’s case. I claim no expertise beyond that. She sometimes expresses anger, but she does not rave. That term is a melodramatic overstatement, and, I might add, it is pejorative. And she is not mad or “out of her mind,” whatever that means. In fact, she lives very much in her mind. The problem is that from within her mind she is not usually in strong contact with the here and now. Rather she seems to live among random long-term memories, which are quite accurate, and thought that appear to be the product of the wonderful imagination that enabled her to be a prize-winning writer of short stories.
Moving from etymology of the word to its medical meaning does not produce a great deal of clarity. The expert neurologist in Ann Arbor we consulted was not quite sure exactly which label to put on my wife’s disease since dementia describes the range of symptoms of a malfunctioning brain, those symptoms varying depending on which part of the brain is impaired. Impairment to different parts produces different symptoms, indicated by different names, such as Alzheimer, Parkinson, or frontotemporal. In my wife’s case, apparently, the neurologist could not pin down with assurance which part(s) of her brain were being affected, thus the inability to label with precision.
We could have returned to Ann Arbor to let him try again, but that seemed pointless. The two hundred fifty-mile trip, plus a night in a motel, and then back again would have been a lot of stress for no particular gain. Whatever the type of dementia, the disease is incurable. The same medications, of limited use, would be prescribed for each of the subcategories.
And I don’t care what the label is. I live with the symptoms.
In the impending car crash analogy, I note that the pedestrian does not even look up despite the blaring horn and squealing brakes. Rather she totters along, does not look at the steel bearing down on her. And for that matter, there is no horn nor squeal of brakes. All is silent.
She is unaware. She no longer properly processes images or sounds brought to her brain by her still functioning eyes and ears. These organs continue to work reasonably well. But a buildup of protein impedes the passage of their information in her brain.
That is what causes her dementia, her lack of connection to her environment, her inability to retain in her short-term memory what she does perceive, or even what she thinks, or says.
So, let’s change the terms of the analogy to something else, to, let us say, the representation of the cognitive disassociation with the here and now, a withdrawal into shards of old memories and fragments of imagined narratives.
It is important for me to remember, and to note here, that almost anything one can say must not be understood as absolute or constant. It is a truism that the degree of impairment and resulting symptoms does fluctuate from day to day, or even moment to moment. Its overall dimensions and direction, though, are clear enough.
Finally, the analogy suggests speed, whereas dementia works its terrible chemistry more or less slowly. In my wife’s case, faster than expected. More of that later. And the climactic thud of the crash, steel mashing flesh and bone is nothing like the gradual disengagement of the mind as it retreats into itself, progressively unable to do the simplest everyday tasks. Also, the driver desperate to avoid the collision is nothing like the unknown agent that causes brains to cease functioning. In fact, the driver of the disease is best understood as disinterested, perhaps even bored, with its destructive power. And that is its ultimate horror.
Thus, this analogy takes us only so far.
But in the absence of anything better, it is all we have, and since I am trained in, and for many years taught and wrote about, literature, my mind turns to it for a way to grapple with this situation, to find a way to make some sense out of it. To reason with the unreasonable, to speak the unspeakable. And in that respect, literature serves up a wonderfully apt guide in the person of the brilliantly weird Franz Kafka, one of whose stories is peculiarly apt to get one’s hands around this disease, to squeeze hard, to hold it still long enough to begin to understand. And if not to understand to find some peace, to be able to stop clenching your fist and howling.
Supper preparation calls.  Kafka will have to wait.